This December I will be a 2 year survivor of breast cancer.
To celebrate, Taylor and I got some pink ink. 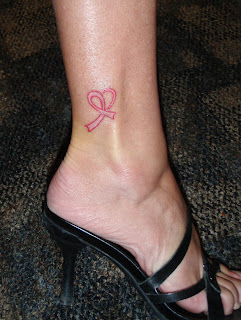 What a shock it was to learn of my diagnosis on December 6, 2008.  I had a benign lump removed from my left breast four years prior so when a new lump developed a year later my doctor was certain it was nothing to worry about.  But as the following year progressed the lump grew.  It was situated more toward the middle of my chest on my breast bone.  It went from being a pea sized lump to a walnut sized lump.  I put off going back to the doctor because I didn't want to sound like a hypochondriac, plus my husband kept reminding me that the doctor said it was nothing.  You could start to see the lump through my skin.  One night while watching TV in bed with Taylor, I asked her to feel it.  She gasped, “mom, that can't be alright”.  The next day I made an appointment with doc.  He did an ultrasound and still assured me it was a benign fibroid, but because of the location and since it was bothering me, he would remove it.  Much to my surprise (and his), he phoned three days later and gave me the news.  Ladies, please don't ignore your body, if you think something is wrong, it probably is.  We are some pretty smart chicks.

I must say, the initial shock was the worst of it for me.  Of course the first thing that goes through one's mind is “I'm dying”, “I don't want to be a burden to my loved ones”, “I have to be around to see my daughter grow up, marry, and have children”.  But once I learned of my options, started educating myself about bc and reading other's stories, I determined that a positive attitude was the healthiest way to start beating this thing.  I had a wonderful team of doctors and an extremely loving and supporting family.  After a bone scan and another surgery, it was determined the cancer had not spread.  I was one of the lucky ones.  I had no family history of breast cancer, but did have a grandmother and great aunt die from ovarian cancer.  My doctors sent me for a BRACAnalysis genetic test.  My number came back pretty low, good news.
I opted out of chemotherapy and instead just did seven weeks of radiation.

I look back now and think wow, that whole deal could have turned out so much worse.  Then I think about all the women whose situations are and were so much worse.  My heart goes out to them and their families.

I will say that a few positive things came from my experience.  I have a new found appreciation for my friends and family and life in general.  I don't sweat the little things anymore.
So what if I go to bed with a sink full of dishes; so what if I don't make the bed. . .

We are all on this earth for such a short time anyway. . . I'm going to make the most of it by enjoying my friends, my family and my home.  I used to not be a huge fan of tattoos, but if they truly mean something to you, I think they are okay.  It was Taylor's suggestion to get our pink ribbon tattoos to celebrate my fight and everyone else who is fighting and to remember those who have lost their battle.
Thank you Taylor, I love you.

My team of doctors and specialists were so great, I wanted to give something back to show my appreciation for making my experience as pleasant as possible.  I made them breast cancer awareness soy candles and boxed them up in a recycled Victoria's Secret box.  I chose the scent “Angel”. 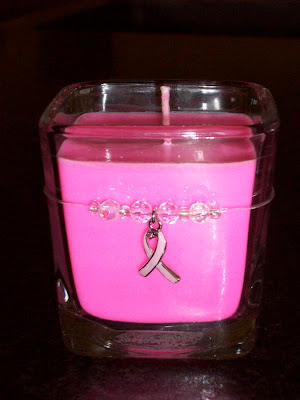 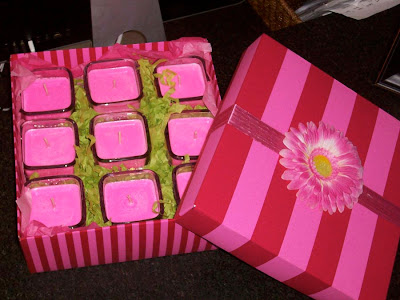 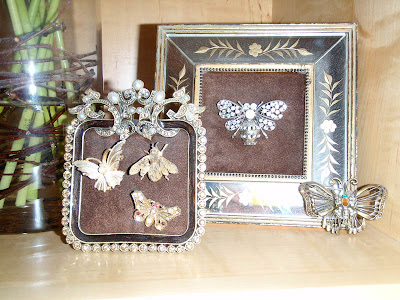 Here is a cheap little project that adds some glam to a shelf, nightstand or any little place that needs some blinging up.

Ask grandma nicely if you can raid her jewelry box. If she says no, check out your local junk stores (or wait until grandma falls asleep. . .just kidding).
Whatever, just get your hands on some cool old brooches.

I found some cute, blingy, cheap frames at Hobby Lobby and took the glass out. I hot glued some batting onto the back of the frames and covered them with a micro-suede fabric then put the frames back together and pinned on my brooches. Viola! Instant blingage. 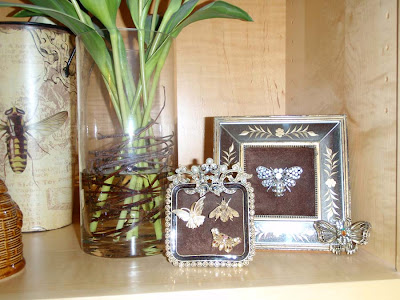 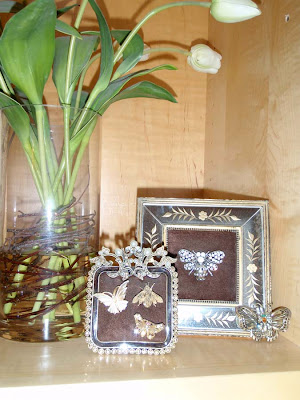 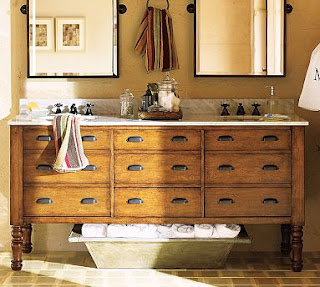 So who doesn't love Pottery Barn?

I had a basement bathroom in need of a vanity. Of course I found one I fell in love with in the Pottery Barn catalogue. However, even if I was willing to spend the $1500 on it, I didn't have room for a double vanity.

That's where my buddy Dave came in. He is a terrific carpenter that just so happened to owe me a favor. Yea for me!!!! I drew up a scaled down version of the Pottery Barn vanity and handed it over to Dave. I bought the materials and the pulls and Dave went to town. I had him assemble it, leaving the distressing and staining to me. (Heck, I had to take some credit for it. . .) 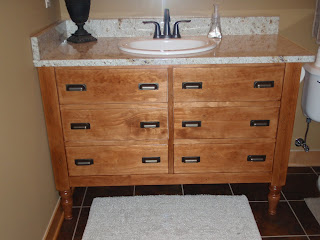 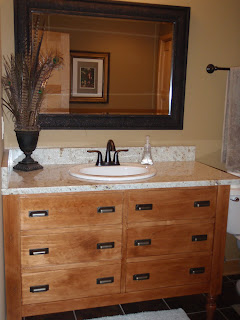 Heidi
We live in Iowa City, Iowa - - Home of the Hawkeyes! My husband owns a masonry business and we are the parents of a beautiful daughter, Taylor and a fur baby, Sullivan Arthur. I am the Production Manager for The Daily Iowan (the newspaper at the University of Iowa). I enjoy refinishing and repurposing household furniture and decor and doing freelance graphic design. I love having these creative outlets; which can be pretty important things when you live in Iowa. . . I find they are much better alternatives to cow tipping. 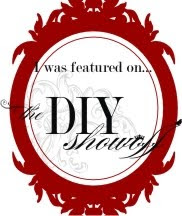 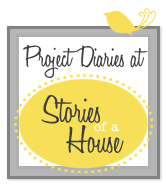 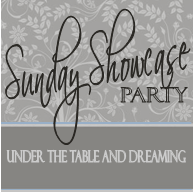 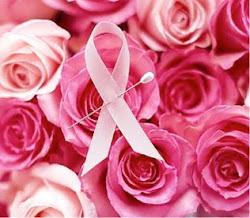